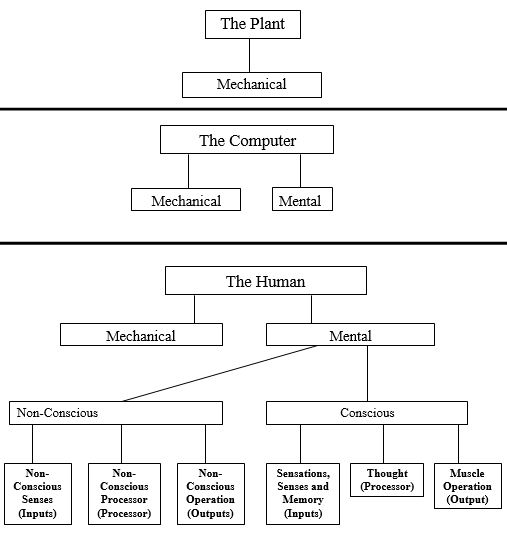 The above diagrams present theory from which to describe the plant, the computer, and the human. The plant is shown as “a purely mechanical entity,” or something that does not “process information.” A mind does exist in the model for the computer, but it’s not a conscious mind, and thus “a sensation/self” element does not exist here. As for “the human mind,” it is partitioned into conscious and non-conscious classifications. The following discussion exclusively references the non-conscious portion of the human mind. The terms “inpu,” “processor,” and “output” are used to help classify the three basic functions which seem necessary for effective mental function to occur.

We will begin with the input portion of the non-conscious human mind. In order to properly regulate heart function, for example, this mind should require a great deal of input information from which to assess, perhaps, how much oxygen is in the blood, how much physical activity is occurring, body temperature, and so on. For a second example, perhaps the non-conscious human mind monitors virus and infection attacks through various “non-conscious senses,” assessing their location and nature so that more effective countermeasures might be implemented. A full list of human non-conscious senses should be quite extensive. Observe that if the keyboard for the computer which I’m now using is one of just a few kinds of input to its mind, then the human non-conscious mind’s presumed “countless inputs,” already suggest a tool which is many orders beyond this machine.

Another identified element of the non-conscious human mind addresses a “non-conscious processor,” or something that should essentially function as a computer processor does. With various inputs to “process,” or “evaluate,” this mechanism must essentially “figure out what to do.” I presume that it instructs the function of organs like the heart, helps fight virus and infection attacks, helps regulate body temperature, and so on.

When a finger becomes damaged, for example, various non-conscious senses presumably detect this circumstance, the non-conscious processor then figures out what to do about it, and one of many associated non-conscious outputs might be the creation of pain. This sensation would then be something for “the conscious mind” to deal with, or a dynamic that will be discussed in the next chapter.

Perhaps “the non-conscious mind” is generally responsible the vast majority of all mental function, simply given its basic nature. For this same reason, furthermore, perhaps “mechanics” ultimately dwarfs the role that “the mind” generally plays by a similar margin. If so then the remainder, or “the conscious mind,” might be seen as a relatively minor aspect of human function. But given that consciousness has also been defined to harbor “self,” it must nevertheless encompass the entire concept of “importance” — and quite regardless of any perhaps limited functional scope of what consciousness ultimately “does.”

((Given that I’ve invented my own “non-conscious mind” term rather than rely upon the standard “unconscious mind,” the following two paragraphs are presented to emphasize that I am indeed using a “nonstandard concept” here.

The “unconscious mind” was largely popularised through the work of Sigmund Freud in the early 20th century, though even modern definitions seem quite different from the idea which I’ve just presented. “Wikipedia” roughly defines it as a hidden portion of consciousness which contains “repressed feelings, automatic skills, subliminal perceptions, thoughts, habits, automatic reactions, complexes,” and perhaps “hidden phobias and desires.” Such an “esoteric consciousness” idea seems quite unnecessary to support my own theory however. Perhaps the questions which an “unconscious mind” idea was invented to answer, simply appeared useful given various “foundation problems” associated with these fields. Regardless, to support my own work there is simply the need for “a computer-like portion of the mind” as noted above, as well as “a conscious element” which will be discussed in the next chapter.

Nevertheless I do have one conventional use for the term “unconscious.” When a person has head trauma such that consciousness has been lost, for example, it’s common to say that he or she has become “unconscious” (and presumably without also visiting a world of “Freudian slips” and such). While I could refer to this person as “not conscious,” or state that the non-conscious portion of the mind is now the only functioning mental element, the term “unconscious” does seem to have good “flow,” and is even conventional.